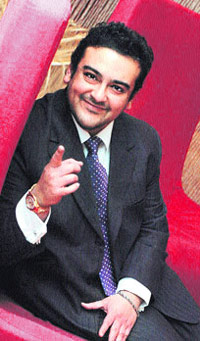 Being obese or even fat is not easy these days, along with the part of being overweight you also need to have a thick skin to bear the comments and the snide remarks people throw at you. Now imagine being morbidly overweight at 206 kilos and being in the limelight, the negative comments just come up in heaps and your weight issues are out in the open for everyone else to see…

But this article is not that, it is about fighting all odds and grabbing the second chance that life hands out to you, it is about what fierce determination and unflinching familial support can do to you- that is make impossible not quite unreachable……

That is the story of singer, composer, child prodigy- Adnan Sami whose voice and whose musical ability had the whole of the Bollywood asking for more. His all time hits include ‘Kabhi toh nazar milao’ A R Rahman’s ‘Udi, udi, udi’ as well as the hummable ‘thodi toh lift kara de.’ But along with the accolades, it was his weight which got a lot of attention from the media. And when Adnan emerged fitter, slicker and minus 130 kilos, the world wanted to know how he managed to do it. With radical diet changes, dedicated time off work, he has managed to pull it off in just one year. We share Adnan’s amazing story with you to inspire us all to be a healthier version of our selves… Adnan was going through personal crisis for years now and this cycle for reaching out to food for comfort and then getting depressed thus eating more, resulted in him weighing more than 206 kilos at that time.

His now heavy body had a huge impact on his health,

Walking- Adnan had to use a walker to help him get around. He says that he couldn’t walk 5 steps at a time without resting. His knees, unable tobear the weight of the body gave up. In 2005 his knees developed Lymhedema or fluid retention in the knees which required a surgery and had him bedridden for almost 3 months.

Sleeping- Because of his increasing weight Adnan couldn’t breathe in the lying down position.  When he did lie down he needed pillows to help him stretch his legs and needed help getting in and out of his bed.  Due to extra fat in his body, whenever he lied down the fat pushed into his lungs causing sleep apnea which robbed him of restful sleep. Finally he had to be content in resting on the sofa; but his blood vessels had trouble pumping the blood back to the heart and he suffered from fluid retention in his legs.

Travelling- Being a Singer, Adnan had plenty of travelling in his schedule but his enormous weight made him constantly anxious about his travels. He needed to carry a custom made wheelchair in the airports; he needed to book flights which could provide extra large seats and in restaurants he made sure they arranged for a large enough seat for him.

Clothes– Adnan always faced the difficulty of finding clothes that fit him. Whenever he found his size 6X abroad he would buy them in bulk because they were difficult to find at home. So he ended up having most of his clothes tailored, but to his embarrassment even the tailor needed two tapes to measure his body!

Even though it was clear to everyone else that he needed to do something about his self, Adnan was not quite ready to make the changes until a doctor’s ominous prediction. The doctor told Adnan that unless he does something about his weight, he has only 6 months to live. This time, Adnan had to take the verdict seriously because deep down he knew that his body was giving up.

There were many other instances when Adnan earlier had been to a nutritionist or a doctor and couldn’t find the courage to make the kind of change that is required. Finally when he was about to quit and give up and resign to his fate, it was his father who shook him and said ‘enough is enough’. Adnan’s father gave him an ultimatum that unless Adnan devotes 6 months of his life to regaining his health or he would walk out of his life.

Finally Adnan negotiated the time to 3 months of ‘no work and only weight loss’ and moved to Houston and handed himself over to a nutritionist.

Examining the relation with food

Everyone had a different relation to food. Adnan’s nutritionist studied his reaction to food and found that Adnan had the habit of emotional eating, whenever he was either happy or sad, he ate. All his emotions were deeply connected to food and depression due to his weight only increased his dependence on food for comfort. Further, his metabolism weight being sluggish did not help his case.

Adnan points out that everyone who sees an overweight person just assumes that he or she is so because the person is too lazy or careless. His opinion is that there are genes, emotional issues and metabolism rates that all have a stake in the weight. He says, “People look down upon obese individuals and make fun of them. You don’t make fun of a person’s physical disability – if they’re handicapped, blind, short, tall; it’s not their fault. This is also true for obesity.”

Initially Adnan admits that when he lost the first 4-5 kilos, he could hardly see any difference but his family egged him on and constantly complimented him for looking better.

Adnan adds that being so heavy; he was in no shape to exercise, so he stuck to dieting for 2 months with a bit of walking. Only after losing about 40 kilos, Adnan was able to walk on the treadmill and do some of the exercises. He started noticing small changes in his body, from being able to sleep lying down, to requiring no help in getting up. Adnan also realized that slowly and steadily he was getting better.

Adnan’s nutritionist studied his body, his mental and physical make-up and suggested a diet regime for him.  He was told to stay away from rice, bread, sugar and oil and eat only foods that are high in protein. But this did not mean that he gave up all the things he loved; instead of binging on unhealthy snacks, he was given the option of opting for home made popcorn with salt, choosing diet chocolate fudge sticks as a sweet option, going for diet ice lollies instead of ice creams. Adnan said that he almost discovered a different world out there that is diet friendly.

After Adnan got used to this kind of diet, he said he could continue it easily at home in Mumbai also.

Going out during weight loss

Being a celebrity, Adnan was invited to lot of parties but he realized that being out is not a good enough reason to forget your diet.  One factor which frequently interrupted his attempts to stick to his diet was the overtly courteous Indian hospitality which forces people to overeat; Adnan devised a solution by always carrying a heavily laden plate in his hand so that people would feel that he was having enough food.

He narrates that even when he stuck to water instead of the drinks, everybody assumed it was vodka, and he simply let them. To read more about Adnan Sami’s Amazing Weight Loss Story by Medimanage.com